Princess Daazhraii Johnson grew up eating dried salmon and moose-head soup — foods labeled weird by other kids who had no understanding of her culture and traditions.

Now the Fairbanks woman and other Alaska natives are presenting their world to a general audience with “Molly of Denali”, the nation’s first-ever children’s series featuring indigenous leads.

The animated show, which premieres July 15 on PBS Kids, highlights the adventures of a 10-year-old Athabascan girl, Molly Mabray. Her family owns the Denali Trading Post in the fictitious community of Qyah, whose residents are both native and non-native.

“We have an opportunity with this show, with ‘Molly of Denali,’ to inform and to show us in a positive and respectful light,” says Johnson, creative producer of the series and a member of an Athabascan group, Neets’aii Gwich’in.

Her family has roots in Arctic Village, Alaska, but she grew up all over the state, she says, including summers spent with her grandmother in the Gwich’in village of Fort Yukon.

Native Americans voice the indigenous characters in the series, which is co-produced by Boston-based WGBH and animation partner Atomic Cartoons in collaboration with Alaska native advisers and script writers.

Molly is voiced by 14-year-old Sovereign Bill of Auburn, Washington. Bill, who auditioned for the role after hearing about it through a Seattle-based native youth theater group, is a member of the Muckleshoot Indian tribe in Washington and the T’ak Dein Taan clan of the Tlingit tribe from the southeast Alaska community of Hoonah. 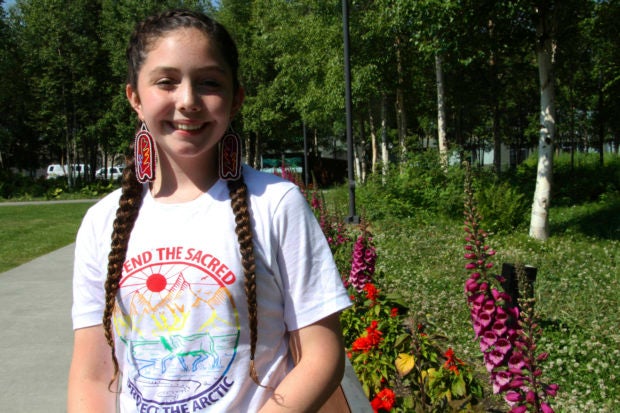 Sovereign Bill, who voices the lead of the new PBS series “Molly of Denali,” outside the Anchorage Museum in Anchorage, Alaska. Image: AP/Mark Thiessen

Bill said her mother was deeply touched by one of the stories in the hourlong premiere: a look at Molly’s grandfather, who left his traditional drum with a friend way back in his youth. Molly goes on to find the friend and drum in another community, using clues in an old photo of her grandfather and his friend to search the internet.

It turns out the grandfather had given up singing along with the drum after he was sent away — as scores of native children once were — to boarding school, where students were prohibited from practicing their tribal songs amid language suppression efforts. The story ends with the grandfather reconnecting with those cherished traditions.

Molly, voiced by Sovereign Bill, left, and her mother, voiced by Jules Koostachin in a scene from the animated series “Molly of Denali”. Image: Courtesy of PBS via AP

Bill said her maternal grandmother also had been sent away to boarding school. Given her family’s background, Bill’s mother was nearly brought to tears because of the story’s “good message.”

“It’s able to pass on that message through a kind and loving and kid-friendly way,” she said. “But it’s still teaching and it’s still giving those important values.”

As for Johnson’s childhood food favorites, dried fish makes an appearance in the show. What about moose-head soup? “Not yet,” Johnson says with a laugh.

Following the longer premiere, the 30-minute show will run mornings seven days a week, according to WGBH executive producer Dorothea Gillim. PBS ordered 38 half-hour episodes besides the premiere, with 13 episodes set for the first rotation.

Each episode also includes a short video featuring real Alaska native children living life in a vast state populated by multiple native groups with their own diverse cultures and languages.

Gillim said she long wanted to do a show featuring a store that is a social center for locals, like a local store of the Rochester, New York-based Wegmans grocery chain was for her growing up in that city. And WGBH co-creator Kathy Waugh always wanted to do one on an outdoorsy girl. The store became a trading post when the creators decided to place it in Alaska after hearing that then-President Barack Obama visited the state in 2015. 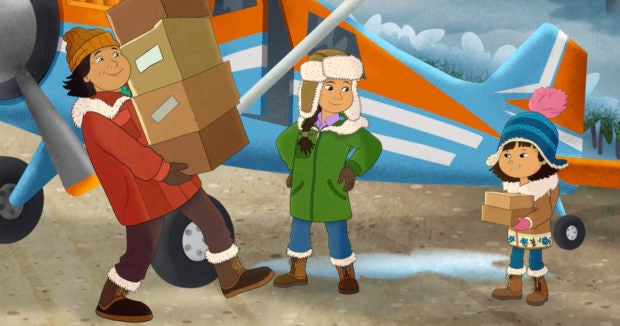 From right, Molly, voiced by Sovereign Bill, her mother, voiced by Jules Koostachin, and father, voiced by Ron Harris, in a scene from the animated series “Molly of Denali”. Image: Courtesy of PBS via AP

PBS gave the green light for a pilot on the concept. That prompted the non-native creators to reach out to indigenous experts in Alaska, creating a team of cultural advisers for the pilot and, ultimately, the series.

“We knew immediately that we needed to partner with Alaska natives to develop it so that it was truly authentic,” Gillim said.

Among those advisers is Anchorage resident Rochelle Adams, a Gwich’in Athabascan linguist who still lives part-time in the tiny Yukon River village of Beaver in Alaska’s interior, where people continue to live a subsistence lifestyle, hunting for moose and black bear.

In 2016, Adams and other advisers met with Gillim for two days in Fairbanks in what Adams describes as an intensive time fleshing out the characters and their community. Adams said she hopes the series educates the world amid so many misconceptions about the state and Alaska natives.

Each episode contains two stories introducing children to various cultures, people and places through Molly, her dog Suki, her native friend Tooey and African-American friend Trini, whose family moved to Alaska from Texas. To reflect the community’s fictitious location near Denali, North America’s tallest mountain, Molly’s family is Gwich’in, Koyukon and Dena’ina — three Athabascan groups among 11 with ties to the region.

That level of storyline attention is a long way from Adams’ childhood, when she never saw anyone like her or her family depicted in pop culture.

“All I saw was people that didn’t look like us,” she said. “So working on this has been such an honor for me.” RGA