Home   >  Entertainment  >  Awkwafina: From ‘Crazy Rich’ to ‘The Prom’ with Meryl Streep
4 years ago inquirer 0 Comments

LOS ANGELES—“Oh man, I can’t believe it—Meryl Streep and Nicole Kidman,” Awkwafina said about the prospect of working with the two actresses in Ryan Murphy’s film adaptation of the Broadway musical, “The Prom.” “It’s like a dream come true.”

“Yes, I am going to be a publicist!” exclaimed the actress, sassy in a Stella McCartney dress and Sam Edelman shoes.

Ever since breaking out as Peik Lin Goh, the best friend of Rachel Chu (Constance Wu) in “Crazy Rich Asians,” Awkwafina has been, and will be, handled by different PR folks for her impressive projects.

The Chinese-Korean-American, who turned 31 last June 2, is winning acclaim for Lulu Wang’s dramedy, “The Farewell.” She is a voice talent in at least four projects: “The Dark Crystal: Age of Resistance” (as The Collector), “The Angry Birds Movie 2” (Courtney), “The SpongeBob Movie: It’s a Wonderful Sponge” (her character is not yet announced) and “The Little Mermaid” (Scuttle).

She’s also in “Jumanji: The Next Level” and “Breaking News in Yuba County,” where she pits talents with Ellen Barkin, Mila Kunis and Regina Hall.

Back to “The Prom,” a Netflix film set for release next year, Awkwafina, who first gained attention as a rapper with viral music videos, shared that she was a musical theater geek.

“I was a bit of a musical freak growing up,” said the native New Yorker whose real name is Nora Lum. “I was one of those show tunes kids, if you will. I loved ‘Rent.’ I saw ‘Kiss Me, Kate’ eight times. I loved ‘Oklahoma.’”

“It was so epic, dude,” Awkwafina gushed about voice acting for the series. “Louis (Leterrier), who directed the whole thing, is incredible. I used to watch ‘The Dark Crystal’ as a kid. I remember just still feeling scared. I am voicing (The Collector). She is a Skeksis. She is an evil one. She is perpetually sick. She has my voice and she sneezes and coughs a lot.” With a laugh, she quipped, “Just like me.”

For now, this is all she can say about the eagerly awaited series: “What fans can expect is it’s pretty intense.” 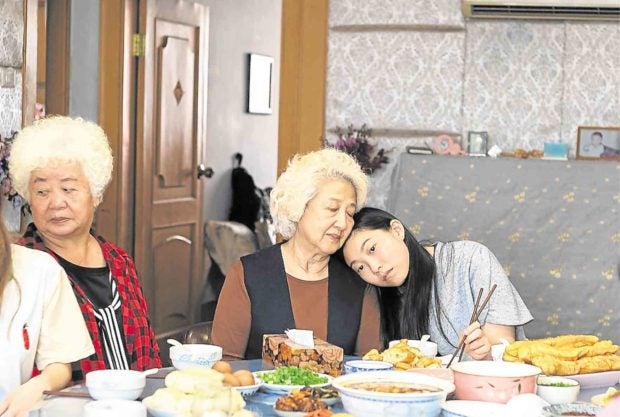 Awkwafina (right) in “The Farewell” —A24

In Lulu Wang’s “The Farewell,” which has been stirring buzz since it debuted in this year’s Sundance Film Festival, Awkwafina delivers in her first dramatic and lead role. She plays Billi, a girl born in China but raised in the United States. Billi returns to China to visit her beloved grandmother, Nai Nai (Shuzhen Zhao), who has only a short while left to live. But the family decides to keep Nai Nai in the dark about her health, scheduling a grand wedding as a convenient way for the clan to gather before she passes away.

The American-raised Billi has qualms about keeping the truth from her Nai Nai, who is inspired by Lulu’s real-life grandma.

“When I first heard the story, I was like uhm, no, I couldn’t,” Awkwafina answered when asked about her stand on not telling Nai Nai about her health condition. “But then being in China and understanding the reasoning for it—it’s done for love, because you don’t want them to carry that burden, you want to go through the burden for them.

Awkwafina said that many scenes resonated with her. The actress, born to a Chinese father and a South Korean mother who died when Awkwafina was 4, was raised by her paternal grandma.

“There were a lot of super moving scenes for me, obviously,” she said. “But I think of the first scene I ever shot—when grandma and I are playing outside doing the thing (exercise routine ending with a ‘Ha!’ yell). I don’t speak Chinese. I basically had to learn a lot of it for this movie. But that is how we bonded, that was the first time I met her. We were giggling, and a lot of the laughing wasn’t planned.

“I realized that as someone who had been going back to China to see some of my relatives whom I can’t understand, there is a bond that does not need words.”

Awkwafina talked about one especially emotional scene: “So the scene where I am saying goodbye to grandma was very heavy. Lulu’s real grandma, who did not know what the movie was about, came up to me and was like, ‘Why are you crying?’ I was like, ‘Oh, if I could only tell you.’ I still don’t understand a word that the woman who plays my grandma says because I don’t speak Chinese, but I love her.”

Awkwafina explained where her confidence comes from. “At first, it was from having nothing to lose, because I don’t come from a rich family. I was working at a bodega (she worked as a cashier) in New York. When you have nothing to lose, you would be surprised at how shameless you get.

“Also, ever since I was a kid, I had this [raspy] voice. I was called weird a lot. I would come home and my grandma who raised me would tell me, ‘Don’t let them tell you what weird is, because the things that they think are weird, will make you special.’ She always gave me that confidence and spunk.”

She recounted her growing up years. “The cool Asians didn’t like me. They were like, ‘Who’s that?’  So I didn’t really understand the way that the community takes care of each other when I was young. Because New York is so fragmented. There are so many different races. I hung out with people of every color.

“As I grew older, especially when I entered this industry, the aspect of community became very apparent to me. We have to do things for each other and we have to look out for each other. I was also having conversations.

“I have had the pleasure of meeting Lucy Liu. I have talked to these other actors and actresses who came before us, who went through times where they were given roles that if you see them now, you are like, ‘This is a backward role. Why would an Asian person take that?’ And so now, it’s like an appreciation of what we do to each other as well as an appreciation for these stories that need to be told.”

On the talk that Jon M. Chu will direct the two sequels to “Crazy Rich Asians” at the same time, Awkwafina replied, “Oh man, that’s a lot of work (laughs). I heard something similar, but I don’t know.”