Vargas broke the news of the collaboration after the film’s story conference, as seen on photos he posted on Instagram last Tuesday, July 9.

“Something’s up!!! So excited to work with two of the best actresses of our generation @missizacalzado and @shaina_magdayao,” he said. “And two of the most brilliant creative minds of Philippine cinema @macalejandre and #rickylee.”

Magdayao expressed her excitement for finally being able to act for a Ricky Lee script. She shared with fans a moment with her fellow actors, the director Mac Alejandre and Ricky Lee himself during the script reading session.

“First time to breathe life into a Ricky Lee character,” she said via Instagram Stories on the same day.

Calzado also expressed her gratitude on being part of the new film.

“So grateful to be given this opportunity to bring to life another character written by @rickyleeph,” said Calzado on Instagram Stories on July 9. “Excited to be working, yet again, with my good friends @alfredvargasofficial and @shaina_magdayao” 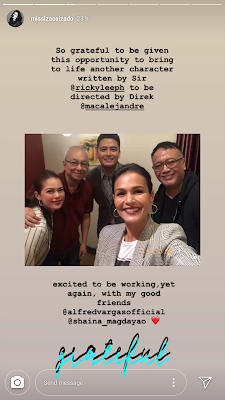 The film’s current working title is “MNL/HK/NY”, and will be helmed by filmmaker Mac Alejandre. Aside from this new project, Lee also wrote “Culion”, another movie which also stars Calzado, alongside Jasmine Curtis-Smith and Meryll Soriano. JB