Reluctant teen hero Peter Parker gets to relish his second shot at life in “Spider-Man: Far From Home,” over two months after the epic “Avengers: Endgame”—which changed the landscape of the Marvel Cinematic Universe forever.

This may be his second solo outing, but viewing of that previous film and 2018’s “Avengers: Infinity War” is essential, as the web-slinger significantly figured in both parts.

The Jon Watts film deals with the aftermath of the villain Thanos’ “snap,” which disintegrated half of the population of the universe, and was felt all over the Marvel Cinematic Universe.

This finally answers that baffling question raised by a scene in “Endgame:” Why was Peter (Tom Holland), a victim of the “snap,” back in school where his classmates were still studying, five years later? “Far From Home” definitively answers that and, more importantly, shows the impact of Iron Man/Tony Stark’s (Robert Downey Jr.) heroic sacrifice on Peter.

A field trip to Europe with some classmates starts as a regular break from the cosmic drama that he’s been privy to. Peter, hoping to bond with his crush, MJ, (Zendaya), ignores the calls of super-spy Nick Fury (Samuel L. Jackson), who, along with top agent Maria Hill (Cobie Smulders), has encountered a powerful monster, later identified as an Elemental.

Jon Favreau (left) and Holland in “Spider-Man: Far From Home”

In Venice, Italy, another Elemental suddenly appears and goes on a rampage, but before Peter could effectively assess and put an end to the situation, the timely intervention of a new hero, Quentin Beck (Jake Gyllenhaal), addresses the threat.

With their vacation and Peter’s plans of becoming close to MJ getting interrupted by the destructive creatures—and Fury’s insistence that the teenager should focus on the new mission—it’s not the European break that he had hoped for, at all.

Apart from being better-written than 2017’s “Spider-Man: Homecoming,” “Far From Home” shows a much more comfortable rapport shared by the returning cast members, and that’s reflected on their more relaxed characters.

Peter has a tighter bond with his confidants, his best bud, Ned, (Jacob Batalon) and his Aunt May (Marisa Tomei). There’s even a closer association with Tony’s best friend Happy Hogan (Jon Favreau), and a flourishing friendship with the less-guarded MJ. 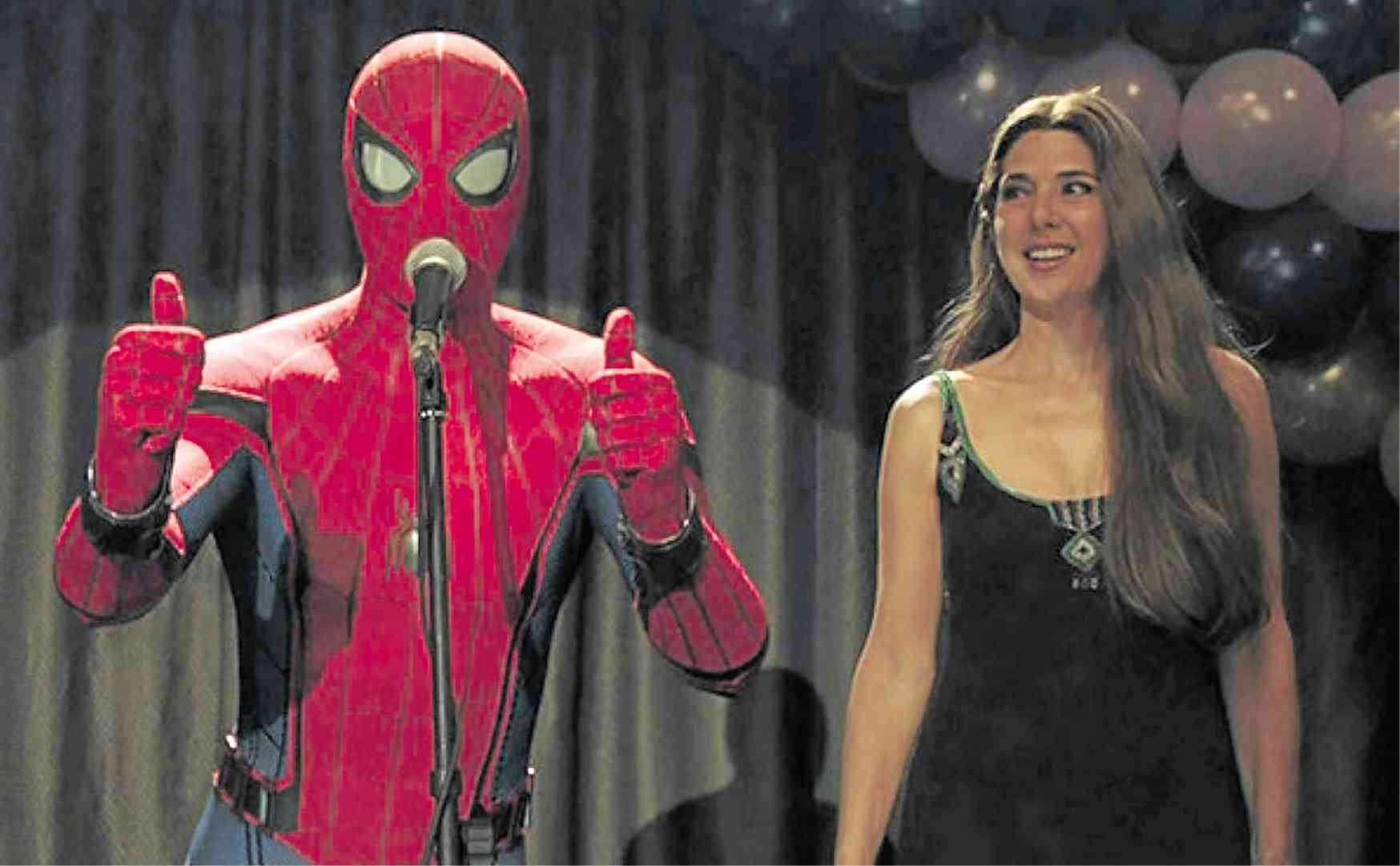 As for Mysterio, those who are familiar with the character from the comics would ask right off the bat, what scam is he pulling now? In any case, he’s equally charismatic and imposing in his live-action debut, thanks primarily to Gyllenhaal.

“Far From Home” sees Peter Parker jumping at chances at being normal, but at the same time, growing in the fallout of loss. While his first solo story didn’t have a done-to-death flashback of how he lost his Uncle Ben, it’s good to see him reacting to the absence of another father figure and mentor here. That was one of the criticisms about “Homecoming”—Tony Stark was an overpowering part of Spider-Man’s first big adventure. But it’s great for the teen hero to finally grow out of that dynamic.

The mix of light and risque humor keeps things snappy, complementing the high-stakes imbroglios excellently. Stay put for two extra scenes: The first reintroduces an important character and presents huge ramifications for Spider-Man; while the other shows an intriguing revelation that may indicate bigger things for the MCU.